Read an excerpt from A Little Short of Boats

The late summer and early fall of 1861—the period between First Manassas and Ball’s Bluff—is accurately described in the opening line of a popular song of the period as being “all quiet along the Potomac tonight.”

Things were so quiet, in fact, that one Confederate later wrote, “During this period of three months there was, practically, a suspension of active hostilities between the Confederate army of the Potomac and the Federal army of the Potomac.” Likewise, a diarist in Company C of the 1st Minnesota rather blandly described the entire time between Manassas and the Peninsula campaign of the following spring when he said, “our principal business through the fall and winter of 1861 and 2 was picket duty along the north bank of the Potomac and nothing very remarkable occurred to me or the regiment except the slaughter at Ball’s Bluff.”

The reason for this extended lull, similar to the static period described as “sitzkrieg” or “phony war” during the early days of World War II, was quite simple. Neither side really knew what hit it at Manassas. That battle, on July 21, was the largest battle in which any American army ever had participated. The Confederates, though victorious, were as disorganized and confused and in need of restructuring as were the defeated Union troops. Sensibly, both armies realized this and pulled away from each other in order to regroup.

Read a full excerpt of chapter 1 here.
Posted by Unknown at 9:57 AM No comments:

My Author Interview with Savas Beatie

: I know that this version of A Little Short of Boats is a revised edition. What prompted you to update the original work and can you tell our readers what some of the differences are between the two editions?

JM: I knew almost as soon as the first edition was published that there eventually would have to be an update. As I continued as a member of the Ball's Bluff guide group, new questions about the battle from visitors were always being asked. So, my research continued to uncover the answers to those questions, plus:

: In your opinion, what was the turning point in the battle of Ball's Bluff and Edwards Ferry?

JM: If I had to pick one that I would call the most decisive moment in the battle, I'd say it was Colonel Baker's refusal to follow Colonel Cogswell's advice to move the whole Union force forward. Baker instead decided to "meet them here," as he put it, and fight on the defensive. With that decision, Baker simply surrendered all of the initiative to the Confederates.

: Why did a routine reconnaissance mission develop into a full-scale battle between the two sides?

JM: Well, it WAS a routine reconnaissance mission at first. Call it accident or bad luck (for the Federals), I suppose. General Stone was operating on the basis of faulty intelligence information from the beginning when he got the report of the patrol on the night of October 20 that there was an enemy camp near Ball's Bluff. When the raiding party he had organized in response to that report discovered that there was no camp, and sent a messenger to tell him that, the messenger's timing made things worse. He told General Stone that there was nothing going on just about the time that the men of the raiding party had been discovered by, and were engaging, some Confederate pickets. So it was a combination of bad information and the delay in getting that information to General Stone that caused Stone to react to situations that already had changed.

: Can you describe the outcome of the battle for each side.

JM: Tactically, not much. Each side held its side of the river a day after the fighting just as it had a day before. The battle was an accident; completely unintended and therefore it had no real purpose or goal. Thus, the only significant “tactical” result was that quite a few men were dead.

Strategically, the results have always been a matter of speculation. We know that General McClellan was under a lot of pressure to act; “Avenge Bull Run!”, “On to Richmond!”, and so on. Would he have conducted a fall offensive and crossed the Potomac before the spring of 1862 had there not been a battle at Ball’s Bluff? There is no way to know for sure but it seems at least possible. Certainly, the war would have been much different had he done so.

Politically, of course, the results loomed large for the rest of the war. The Joint Committee on the Conduct of the War came out of Ball’s Bluff and its effects were deep and lasting. Entire books have been written on the Committee and its actions. I address this in a small way in the Epilogue when I discuss what happened to General Stone.

: Why do you think it was important to write A Little Short of Boats?

JM: Well, it certainly was important to me if only to answer all the questions I had when I first became involved with Ball’s Bluff as a charter member of the battlefield volunteer guide group in 2000. There were so many aspects of the battle that did not seem to me to be properly addressed in the available literature so I began researching the answers. That led to the book. In that sense, the book was an accident just as the battle itself was.

That said, I do think it is important that historical stories be told as accurately as possible. The simple fact is that Ball’s Bluff had consistently been misinterpreted over the years and the literature reflected that. I do not mean that there was deliberate distortion, merely that initial interpretations based on appearances and expectations at the time tended to be accepted without question and repeated over the years. The result was that too much of the Ball’s Bluff story was myth and not enough was history. I hope and believe that I have contributed to changing that.

: What positive or negative role did leadership play at Ball’s Bluff and Edwards Ferry?

JM: Leadership in battle is always important, but that is a mere truism. On the Confederate side, Nathan Evans did well in terms of moving his troops from one place to another as needed. It is true that he had the easier job; defense always being easier than attack. Still, he was a trained soldier who recognized what his enemy was doing and reacted well over the course of the day.

On the Federal side, General Stone acted for much of the day on faulty information. There was no Confederate camp and therefore no need for a raiding party. But for that faulty information there would have been no battle. Stone also believed that General McCall’s 12,000 men were within striking distance and might be moving on Leesburg from the east. This was more bad information as McCall, under orders from General McClellan, was marching in the other direction, something Stone never knew. Leadership depends to a certain extent on information, so General Stone’s leadership was negatively impacted by things beyond his control. Based on what he thought he knew, his actions were reasonable and easily defensible.

Colonel Baker, on the other hand, was simply over his head. He was nobody’s fool, by any means, but he also was no tactician. Despite his brief and competent service in the Mexican War, he had no military training and was unable to properly respond to the fluidity of a battlefield. His actions are typical of early war political commanders. Personally brave, he seems to have believed that that was enough. The Federal defeat must, in my view, be placed almost entirely on Baker’s lack of military leadership skills. Of course, he paid for his mistakes with his life.
(All copyright laws apply to this interview. However, this interview may be posted digitally on the internet or printed for use in newspapers, newsletters, magazines, and other similar uses, provided it appears in its entirety, and that notice of its use is provided in advance to sarahs@savasbeatie.com. We also allow partial edited use, with advance permission. Please inquire. Include our website www.savasbeatie.com and email address sales@savasbeatie.com with use. Thank you.)

Welcome to my blog!

“[P]erhaps a small demonstration on your part would have the effect to move them,” wrote Army of the Potomac commander Maj. Gen. George B. McClellan to Brig. Gen. Charles P. Stone on October 20, 1861. This simple telegram triggered a “demonstration” by General Stone that same afternoon that evolved into the bloody subject of A Little Short of Boats: The Battles of Ball’s Bluff & Edwards Ferry, October 21–22, 1861.

Opposing the Union effort was Brig. Gen. Nathan “Shanks” Evans’ small Confederate command at Leesburg. Reacting to the news of Federals crossing at Ball’s Bluff and Edwards Ferry, Evans focused on the former and began moving troops to the point where Col. Edward D. Baker’s troops were gathering. The Northern troops were on largely open ground, poorly organized, and with their backs to the wide river when the Southern infantry attacked. The twelve fitful hours of fighting that followed ended in one of the worst defeats (proportionally speaking) either side would suffer during the entire Civil War, wrecked a prominent Union general’s career, and killed Baker—a sitting United States senator and one of President Abraham Lincoln’s good friends. The disaster rocked a Northern populace already reeling from the recent defeats of Bull Run and Wilson’s Creek.

A Little Short of Boats sets forth the strategy behind the demonstration, the fighting and the key command decisions that triggered it, and the many colorful personalities involved. The bloody result, coupled with the political fallout, held the nation’s attention for weeks. The battle’s most important impact was also the least predictable: the creation of the Joint Committee on the Conduct of the War. Ostensibly formed to seek out the causes of the string of defeats, the Joint Committee instead pushed the political agenda of the “Radical Republicans” and remained a thorn in Lincoln’s side for the rest of the war.

Gracefully written in a conversational style, this study is based upon extensive firsthand research and a full appreciation of the battlefield terrain. This fully revised and expanded sesquicentennial edition of A Little Short of Boats includes numerous photos and original maps to make sense of the complicated early-war combat. Seven appendices offer an order of battle, discussions of key participants and controversies, and a complete walking tour of the battlefield at Ball’s Bluff. This special edition will please Civil War enthusiasts who love tactical battle studies and remind them once again that very often in history, smaller affairs have important and lasting consequences.
Posted by Unknown at 2:18 PM No comments: 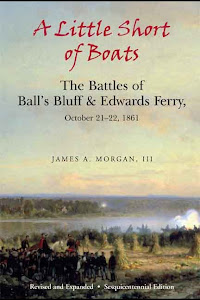 Order your copy here with a signed author bookplate